To receieve a free download link for the Thursday's Child Songbook Performance Pack please get in touch via the email form on our contact page.

For any further queries or discussion re the Thursday's Child Songbook again please get in touch through the contact page.

(Adapted from the traditional rhyme)

Monday's child is fair of face,

Tuesday's child is touched with grace,

Wednesday's child is scarred with woe,

Thursday's child has far to go.

But the child that is born on the seventh day

Is fair and wise and leads the way.

The story line and songs of Thursday’s Child illustrate the issues tackled by the UN Convention on the Rights of the Child. The story is universal, about children searching for a home, protection, love and a future. In the musical, seven of the main characters are named after the days of the week. Each child symbolizes a different situation for children. Thursday is the smallest, weakest, most vulnerable child.

Unfortunately, there are millions of Thursdays’ children in the world, and they all have far to go before they can rest in the comfort of the rights enshrined in the UN Convention on the Rights of the Child; adopted by the UN General Assembly on November 20th 1989, and since ratified by 191 out of 193 countries worldwide. These are some of the issues facing them and presented in the Thursday’s Child Songbook.

This score is arranged so that all the songs can be given in a unison choir performance. A number of the songs have optional ‘descant’ parts which can be added against the lead line for a fuller sound. These descant sections can be heard on the vocal demo recordings (see panel right).

For anyone wishing to produce a more 'staged' performance, the songs could be accompanied by a mime or freeze-frame presentation, or even dramatized using excerpts from the full Thursday’s Child Script,

The piano vocal score is the primary basis of the Songbook accompaniment, but alternatively the companion backing tracks are also provided and are suitable for use in performances. The downloadable Performance Pack additionally contains the demo vocal recordings of the songs as they appear in the score, which can be used as an aid for teaching the music. The backing tracks are solely instrumental mixes of the songs with no vocals at all.

Although the Thursday's Child Songbook is intended principally as a choral or 'School Cantata' work, the songs lend themselves well to be sung as vocal solos and the piano part has been arranged to include the melody line so it can also be played to give an instrumental version of the songs. Guitar chords are indicated throughout the score as either an alternative to the piano, or as an aid for those wishing to augment it with further instrumentation. 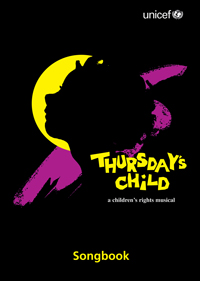 The Thursday’s Child Songbook is for school or youth choir performance and presents the story of the Thursday’s Child musical commissioned by UNICEF, in a simple version of 12 songs, suitable for children aged 6 and upwards to perform. To hear the songs please see the panel right.

40 minutes, but the songs are independent and can be sung individually at concerts or assemblies etc. Each song clearly expresses a message about children’s human rights.