Not yet available - Due for publication in 2019

All ye who have business in this terrible place heed and draw near for fate has decreed you experience a truly "Fangtastic" piece of theatre that fully guarantees to, "Slay them in the aisles".

The Dracula Show combines vibrant song and dance, with incisive humour and biting satire in two hours of mayhem that's sure to end with someone, "Getting it in the neck"!!

Inspired by the memoirs of a dental floss salesman from Whitby, this Transcendental Transylvanian Triumph resurrects the Dracula Legend in a somewhat "Revivified" context.

It's now the present day at Castle Dracula and times are hard! Dracula has been forced to open the Castle up to tourists and put on a cabaret show to make ends meet. Then comes the final straw, a red letter from the Blood Bank saying he's been overdrawn for the last 500 years and if he can't come up with the arrears by dawn they're going to send a priest round to repossess the Castle.

Shock! Horror! Probe! What will he do? Drac's only chance of saving the Ancient Ancestral Abode is to find Great Uncle Vlad's long lost horde of Peculiarly Pressurised Plasma!!

Will they make the "Deadline"? Will Drac get the girl? Who will win the Hypnosis Game?? Does your chewing gum really lose it's flavour on the bed post overnight??? All this and much, much more in next weeks exciting episode!*!*!*!*!*!

Confused? - You Will Be!

Yes, he's your host, he's the ghost with the most, he is, Count Dracula, the man with the intense dental chart - What can we say? - He's even got  his  own 'Fang' Club!

Mad, bad, and dangerous to know, a fatally beautiful young vampire with a secret past, she's the wisecracking star guest singer of Draculas' Cabaret Show.

A real glamour-puss, no home should be without one, and like all good pets she actually thinks that it's really her who's in charge.

The Movin-An-A-Groovin' Reanimated Remains that have a certain style with top hat and cane.

That ubiquitous Mad Professor as you've never seen him before. Yes, this one is completely out of his tree, probably because he's got a big 'Stake' in the show!

Draculas' distinctly un-dead French Maid. She was sent by an agency in Paris to do the laundry - But that was 150 years ago!!

A very 'In your face' child vampire.

Resident girl group at Castle Dracula ever since their car was involved in a bizarre fatal accident with a mobile hairdresser and a van load of gothic rock gear. A powerful vocal/dance ensemble - They're all "soul" with plenty of "bite".

The Children Of The Night;

Studs, Tingle, Twitch, Ultra, Trix, Silver, Raff, Tamsin, Damask, Carab, and Scarab. Together with many assorted Werewolves, Vampires, and Creatures Of The Night.

It's Just So Bizarre!! 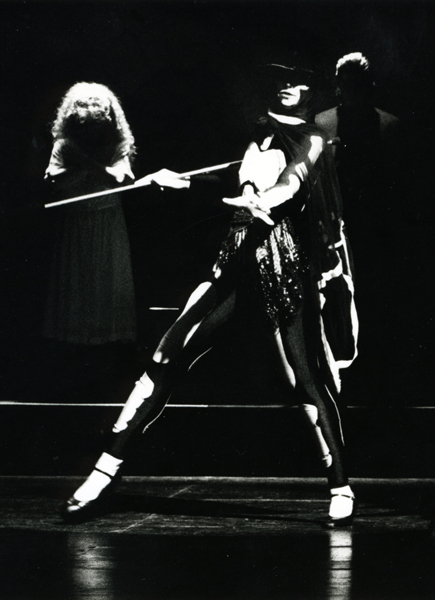 Jane Bean as 'Skelly' at Lincoln Theatre Royal in 1992